Development Log Hi everyone. We are celebrating 500+ members on Discord. Thanks to everyone that joined and are looking forward to the server. We can’t wait till we get to experience the server together with you.

Server UpdateWe are starting the development log with some unfortunate news. We can no longer guarantee a mid-October release at the moment since we have had unfortunate luck with our UCP developers. The developers that took up the challenge with the UCP has fallen through and we are now forced to work on the UCP ourselves. The load of work that landed on to our lap is, unfortunately, going to prolong the release of the server. We still have vital functions that require to be added to the server before the release such as the income of illegal items through factions and a framework for faction management to manage the influx.We are aware that many of you want a confirmed release date but please be patient with us. We were expecting the release of Rage MP 0.4 by now which would fix loads of synchronization issues automatically. There are no further details when 0.4 will be released which forces us to manually create synchronization which is a time-consuming project.

Staff team & FactionsThe staff team is right now working on preparing everything for launch. We have created a huge to-do list and are working our way through it. Next on our list is revising the rules to make sure they’re on par with the level of roleplay we are aiming to maintain. If you are interested to help out, apply to become a helper! Mapping is something that’s very crucial in giving you a unique player experience. We are constantly looking for creative people with experience mapping from other communities. Please contact Oaks for more information on how to become a mapper. There are many questions regarding the police department recruitment. The recruitment will open 2 weeks before launch. You’ll get more details once the server closes up on its release. We are still on the hunt for more players interested in roleplaying as a government official. If it peaks your interest please contact ForgiveMyEngrish for more details. Let’s put all that boring stuff aside and get right to the fun stuff!

The User Control PanelWe have just released the UCP and you can register your accounts and complete the application in preparation for our release. While there are not many functionalities other than the application, especially since you won’t have any characters, it’s still handy to get these done sooner rather than later. Please sign up here and start your applications ready for release!User Control Panel

The Weapon SystemUsing the inventory and item framework, we finished the weapon system in a way we thought was the most user-friendly while staying realistically balanced. It works by three separate items (with most magazine-based guns); the firearm, a magazine and bullets. Once a magazine is loaded, it will stay loaded until you shoot the bullets out of it. This way you do not need to carry around bullets but you also need to ensure you have enough magazines to do whatever you’re trying to do, for example, if you’re using a CCW permit to carry a firearm, you probably just need one magazine, while if you’re an armed Police Officer, for instance, you may need a few magazines and even some extra ammo in the cruiser. Here is a video showcasing how it works currently, thanks to oRe!The Weapons System Video 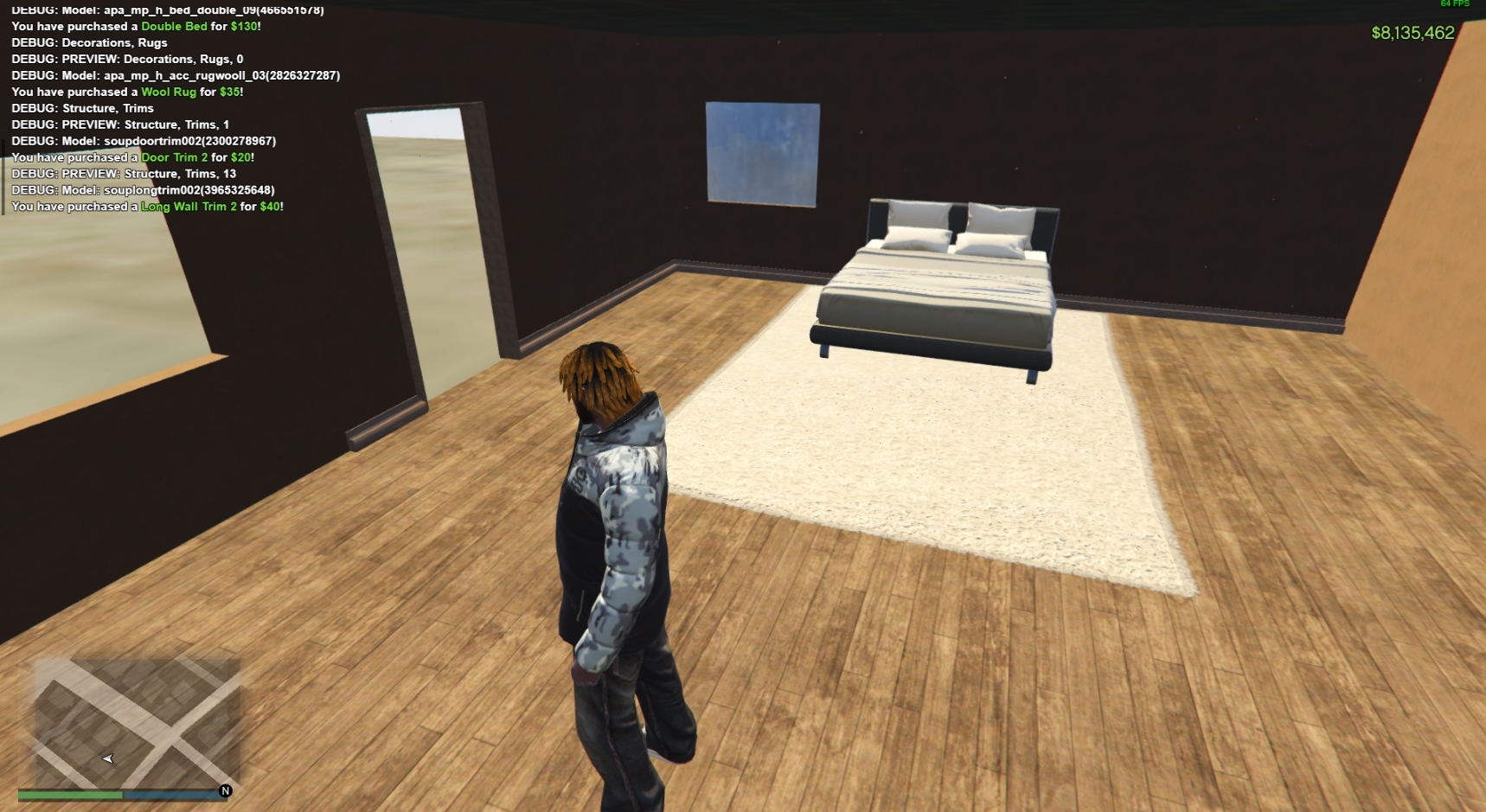 For the furniture system, we grabbed inspiration from another community (thanks DamianC). The controls for moving objects will be improved and more user-friendly further down the line, but right now we have decided to keep it simple for the sake of getting the server released. One big project we have ahead of us with the furniture system is adding more objects. Some objects are unfortunately not available from the stock game since they’ve built straight into the game. In the future, we are going to look into adding modifications to cover for the lost objects. Below you’ll find a video on what you can create with our furniture system.Furniture Showcase Video

The Clothing StoreRight now we’re working on adding more businesses to the server. The clothing store is one of the simpler projects. If a clothing store has components available, you will be able to use /buy and purchase over 200 upper-body presets per gender as well as many options for pants and shoes.

Tattoo ParlourThe tattoo parlour will work very similarly to the clothing store but will include a tattoo system. Think before you ink! Tattoos cannot be removed unless you create a new character or name change. You will be able to pick from the wide range of selection that GTA Online offers.

The Death SystemThis month has seen the introduction of the death system. Don’t mistake this for the damage system - this is how the server handles and functions when a player enters the stages of death. It’s known well that when your character or player enters below 1hp, their character (In GTA V) is considered dead. Here, we’ll be working more into making sure people have the right opportunities to properly roleplay. With that, the following stages and options are available to the player. The current scenario is on the condition that the player is below 1hp.

We wanted to make this “death” system as simple but as opportunistic as possible. We felt the default of “60 Seconds” for a death wasn’t in line with what should happen on a Roleplay server, hence the longer cooldown. In future, depending on the analytics of deaths on the server, we will change and alter the consequences. Dying (and killing for that matter) should be a serious thing!

The Logging SystemI feel this deserves a little mention here. If you have ever had the pleasure of being an administrator / helper / staff member on a large-scale roleplay server, you’ll know the upmost importance of data logging. Not just for analytics, but to avoid and investigate troubles.With this, we’ve made it a priority that everything is logged on the server. @LaBloske has done us the good courtesy of finding a high-capacity server which is able to store and hold all of this data which will then be ported and forwarded to both the UCP and Discord for all of our staff members. Some of these logs will also be important to the player, i.e viewing your own statistical information. So this month was also focused to have this implemented.

Web DevelopmentAs you may have seen, we now have brand new forums and more recently a landing page. We needed to have these features added to give Rage Roleplay a bit more of a brand which is important for attracting new faces. We had several problems with web development over the past month - two faces supposed to handle the UCP rescinded with their personal problems or other projects, so myself and Sparx, who are primarily backend Game Developers, had to step up more forward into the website to get both the UCP, Forums and Landing Page functional and ready for release. This has taken a HUGE amount of our time this month which wasn’t in accordance with our plans. Setbacks happen, and we’re happy to have made the Forum and Landing Page possible.As mentioned multiple times, we ARE looking for 3rd Party Developers. If you feel you can assist and you have the talent with the languages that we’re looking for - feel free to Apply.

The Open Beta!A mistake we see with many servers that open from fresh / ported to new clients is that it’s usually hounded with bugs and issues, and simply fixing that on the fly whilst users are trying to develop their characters, factions or just grinding isn’t good. With this, we’ve decided that we will have a 2 Week Public Beta running sometime beginning the end of October. This gives us some wiggle room and if things do go bad, we can always wipe the characters after the bugs are removed. This solution is a lot better than just delaying release further.

What is a Public Beta

Public Betas are usually for finalizing and/or discovering new bugs / issues or generally monitoring performance on a new server / system / game with high volumes of people or connections. Public Betas ARE NOT a final representation of the end product.

Yes. Some communities hold Closed Betas, usually available to people who donate or contribute, but we want everyone to have a shot at our server. Anyone who has a fully copy of GTA V and RageMP is able to sign up to the Public Beta through the UCP

What about my progress?

If you find yourself participating in the Public Beta, you will have full access to what is available on the script at that time. This means you will be able to gather money / work jobs / participate in factions (Given you’re in that faction already) and more. Since this however is a Beta, all of your important character information (Money / Bank / Items) will be wiped before the final launch. Other statistics that will not adversely affect or give you an advantage on launch (Playtime, donation perks etc) will remain.

Do I need to Roleplay?

Yes. Whilst we do want you guys to try out all of our features, Roleplay is still important on a Public Beta. The server is not OOC during the Beta and will only be OOC when instructed by an Administrator. You are still expected to abide by the server rules. Bans and administrator punishment during this period WILL carry over to launch after the Public Beta.

How long after the Public Beta will the server launch?

If all goes well, immediately. As soon as the 2 Week period is up, we’ll take the server down for an hour or two then immediately issue a full release. If however, we encounter bugs or issues that need to be fixed offline, the server could remain under Development to iron them out.

What else can you tell me?

All participating is highly appreciated during the Public Beta. We need your participation to find out bugs / adjust hardware or even remove features that we no longer find are feasible. One thing that is very important is that you do understand that this is a beta, things are due to change on launch and it’s not a representation of the final product. Suggestions to current features and bug reports are also hugely appreciated during this period.

Ending As mentioned above, we're sorry to be the bearer of bad news but as with basically every other "under development" team, there will be set-backs and those do reflect on the release or expected release of the server. You have to remember, unlike basically any other server on RageMP, we've build this from complete scratch - from one single file beginning on the RageMP client. We hope this reflects well on release, in where you won't see any major crashes like others have experienced elsewhere. We'll have our next and final main development update just before the stand-alone announcement for the Open Public Beta next month. As always, apply for our staff if you feel you have the skill! Share the community with your friends too! We thank you for those that understand! See you next month.

Our next iteration of the Rage Roleplay Development Log! 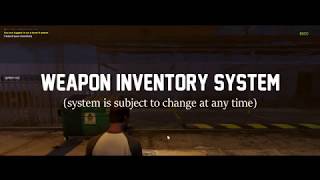 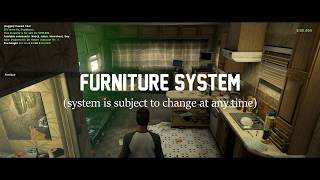